If you are planning to move into a new home then consider taking the opportunity to arrange for any electrical (or even other work) to be completed before furniture and personal items are moved in. It is often cheaper to complete this type of work in an empty property compared to a fully furnished one.  This can be difficult if you are in a house exchange chain as this could be only for a few hours so a more practical approach would be to understand from your electrician which floors would have to lifted and where access is required, then arrange for those areas/rooms not to be populated with furniture and boxes for a few days.

On a similar theme, if you are thinking of having new carpets or floor coverings fitted then maybe take the time to think about any other improvement work you might want doing under the floor of the affected room. For example if fitting a few extra sockets in a room or running cables under the floor for another near by room, because it would be much cheaper to lift a floor in a room empty of carpets or furniture.

I am surprised at the number of very old Consumer Units (aka Fuse Boxes) I come across in homes, the type with that has rewirable fuses.  Sure these old fuses boxes probably still do OK what they were supposed to do 30 years ago, but since then the introduction of more convenient and technically superior electrical safety protection devices for Consumer Units has been available. Also these new Consumer Units are not expensive compared to the value of a home or home improvement projects.

One example of a safety improvement with the new Consumer Units is dealing with the situation where a home owner hangs a picture using a screw or nail and accidently hits a  cable buried under the wall plaster. With a new Consumer Unit very little electricity flows (not enough to give an electric shock to a human) before a switch automatically trips out to disconnect the electricity. With a rewireable fuse there will be a lot of electrical energy that flows for a little longer and a noticeable pop from the fuse when it blows, worse still it could be the screw or nail will remain live and the fuse will not blow at all!

I also tend to find that if a home has one of these old fuse boxes then the rest of the electrical installation has either outgrown its original intended use or has been fiddled with as number of times over 30 years such that it has become a hazard in places anyway.

If you have one of these old fuse boxes and want to refurbish a kitchen or bathroom, then it very likely it sensibly should be changed at the same time anyway.

Having said that, if a home owner has only budget for either a full electrical inspection or a new Consumer Unit, but not both. Then certainly I would recommend having the inspection done as the priority.

In the latest UK 2015 electrical regulations there has been an improvement to safety for power (13A sockets) circuits in commercial environments. For a new circuit it is more difficult to justify not using a RCD (Residual Current Device)  safety device in addition to the normal Fuse/Miniature Circuit Breaker. RCDs generally are considered a device that protects persons from accidental electrical shock. Whereas Fuses and Circuit Breakers protect against circuit overload that for example could either result from a live wire accidently touching earth or lessor level of overload that could cause a fire.

RCDs are a significant improvement to electrical safety but surprisingly in commercial (office) environments they have not been installed a commonly as one might expect.  Besides the fact the previous regulations did not demand an RCD should be fitted so to save money they were left out, there also has in the past been a concern that numbers of computers on one circuit with an RCD could trip accidently with very unfortunate consequences.

RCD devices are now more readily available for three phase commercial Distribution (fuse) Boards and at more reasonable prices.  Also careful design of the number of sockets on a single circuit can avoid the problem of accidental or nuisance tripping out of an RCD.

In the depths of our winter is the time when office staff may bring in from home or buy extra portable heaters for use at their desks.  Particularly with electrical installations without RCDs this would be a very unwise practice.  The office provided equipment would only be plugged into circuit that was designed for that use and that equipment would have been PAT tested regularly anyway.  If a non PAT tested old heater is plugged into a socket that was intended for low power electrical load and does not have an RCD, then it can result in safety issues.

A few days ago I attended on a fault where an office user reported a smoking and sparking 13A socket outlet.  In this case there was a portable heater plugged in and the heater had been PAT tested.   But the circuit with everything else plugged in was just into overload levels which in turn had stressed what was probably a loose connection in the wiring. The connection had overheated and burnt the back of the 13A socket and wiring.

Those in small businesses responsible for requesting and engaging electrical maintenance should  perhaps make enquires as to whether RCDs are installed on the office 13A sockets, ensure PAT testing is undertaken regularly, do not allow non business provided heating equipment to be plugged to office 13A circuits and importantly when arranging the Periodic Testing of the office electrical installation ensure that part of the brief is for a realistic sample of the wiring connection screws to be checked.

I have noticed a couple of the major building suppliers/trade suppliers are offering at “sale” prices Consumer Units (Fuse Box) for homes that will not be compliant to the updated Electrical Regulations that will be in force from January 2016.  These Consumer Units offered are plastic cases instead of fire resistant steel. These “sale” prices are no surprise because the suppliers will need to get rid of old stock before they become obsolete.

Because the new regulation steel cased Consumer Units are available already then any home owner needing a new one may as well have the  new steel cased unit. They are a little more expensive but safer! The difference in price is will probably be about the same as an annual gas boiler service or a meal out for two. So why not pay a little extra.

Starting June this year there will come into force a number of changes to the British Standard electrical wiring regulations for all homes and other premises. These changes will affect home owners planning to make certain types of changes to home electrical wiring. Electricians offering to undertake these changes, or new installations, will need ensure the work is compliant to the updated BS7671 Amendment 3 regulations. Currently both the new and the previous versions of regulations can be applied because the changeover is gradual between now and January 2016.   To avoid any problems resulting from this regulation change then home owners would be wise to ensure any electrical work is undertaken by a business that is registered in a Competent Persons scheme such as the NICEIC Domestic Installer scheme.

The main changes in the regulations are to improve safety. The most significant is that new installed or replacement Consumer Units (also known as mains Fuse Boxes) will need to be of a non combustible construction. For many years Consumer Unit (Fuse Box) cases in homes have been manufactured from plastic materials and are often installed in a location that is the means of escape from a home. There has been enough incidences of home fires caused by overheating Consumer Units that lobbying by London Fire Brigade of the British Standards has resulted in this safety improvement where all new Consumer Units installed after January 2016 at the latest will have steel construction cases.

Another important change has been introduced as a result of requests by Fire Brigades after an incident involving loss of life in property fire.  A contributing factor to this loss of life incident was wires that had been exposed to heat were drooping down to block a fire escape route. Quite simply the plastic fixings holding up wires melted. Fire officers and persons escaping had problems getting out of smoke filled rooms because the wires blocked the doorways. The simple change in the new regulations is to ensure that cables installed over escape routes are secured with metal fixings, this will keep the escape routes clear in the event of fire damage to cabling.

Here is an example of the problem that resulted in these changes to the regulations for securing cables:- 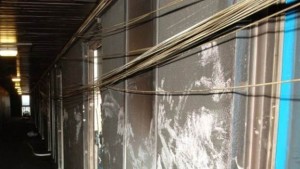 Besides a welcome increase in safety how else will these change affect homeowners?  In the case of the new Consumer Units there is unfortunately an small increased cost. Not only for the item itself but also there is an increase in the labour required to install them.

On a related subject, there are still homes in the UK still have much older versions of Consumer Units (Fuse Boxes), what some might recognise as the old style fuse box with removable/plug in wired or cartridge fuses. These were probably installed between 1950 and perhaps as late as 1990.  Assuming correctly installed and the installation has not been in expertly tampered with since, then these are often still serviceable as they were intended.  But home owners and occupiers should be aware that some of the very old Fuse Boxes are beyond their original expected service life and more importantly a considerable improvement in safety can be achieved by replacing these older style units with a new Consumer Unit containing modern safety devices.  Electrical safety for domestic installations has improved considerably in the last 25 years, in particular the introduction of devices called RCDs which are considered to be of such great benefit that almost all new domestic installations and new circuits legally have to have these RCDs installed.

NexElec Limited would be pleased to offer inspection and installation services for home electrical safety improvements including replacement Consumer Units.