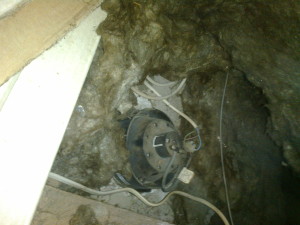 I came across this R80 downlighter in a domestic bathroom. The reported problem was the ES lamp had jammed in the fitting.  Simple problem to solve maybe, or maybe not.  The plastic assembly had hardened with age, the terminal connectors to the supply were not enclosed, the fixed wiring appears to be flex, the fitting was completely covered in insulation and hence a fire risk, not unexpectedly there was no RCD for it, it was an ordinary R80 fitting (not sealed).  Not a pretty sight but had obviously been like that for many years since it was first installed when the house was built.  There were other issues elsewhere in the property so the likely outcome will be a new Consumer Unit and partial rewire.